A publication of Sacred Heart University
Home About Archives
Polemic, Patience and Perseverance
WHY THE CHURCH NEEDS L’ARCHE MORE THAN EVER

Notre Dame de Paris: A Meditation on Meaning and Memory for the 21st-Century Church 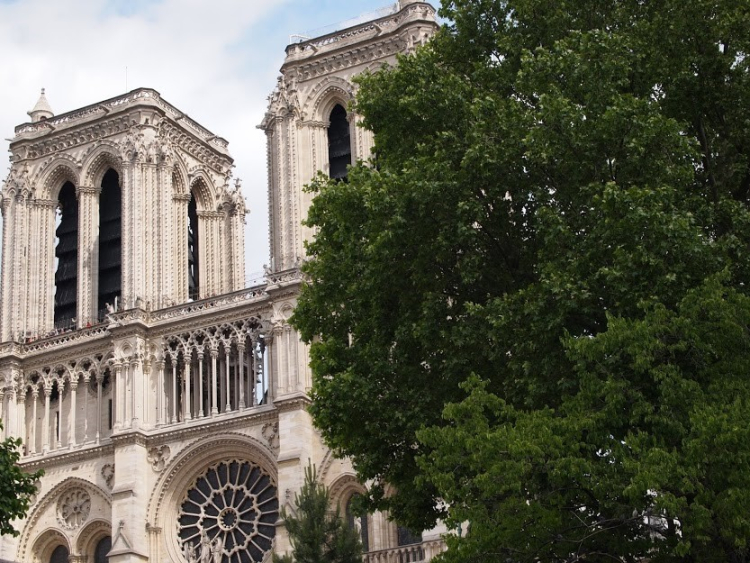 Thence entered I the recesses of my memory, those manifold

and spacious chambers, wonderfully furnished with

innumerable stores; and I considered...

The church of Notre-Dame de Paris is still no doubt, a majestic and sublime edifice. But, beautiful as it has been preserved in growing old, it is difficult not to sigh, not to wax indignant, before the numberless degradations and mutilations which time and men have both caused the venerable monument to suffer…On the face of this aged queen of our cathedrals, by the side of a wrinkle, one always finds a scar. Tempus edax, homo edacior; which I should be glad to translate thus: time is blind, man is stupid.

On April 15, 2019, the world beheld a mournful spectacle in Paris as the fading light of day was pierced with raging tongues of fire that were consuming the fabled cathedral of Notre Dame: its roofing, its spires, seemingly even the flying buttresses of the great Gothic edifice.

The fire would persist for several more hours as people gathered in the area near the cathedral, and thousands more gathered around different forms of media and watched in vain as a manmade marvel of design and engineering was ravaged by the error of man-made technology.

Those who cared to pay attention to the accident did lament the sad fate of Notre Dame but did so, it seems, for peripheral, insufficient reasons: predictably the reasons were about national pride and cultural chauvinism, secular and personal concerns, and even some academic and aesthetic complaints about lost artifacts and marred beauty. Such grievances are understandable, perhaps allowable, but do seem to obfuscate the true legacy of Notre Dame de Pariss—that is, what should be understood about the original meaning of the Gothic structure and about what such an edifice of stone and glass could offer to the 21st century, to the 21st- century Church, to 21st-century Catholics.

We are moved, then, to pause a moment and reflect on Notre Dame, not as a digression into medieval ecclesial culture or as a foray into the nuances of art history, but as a conversation about values and tropes of meaning between past and the present worlds. Like Thomas Merton, who deepened the dimensions of his own life’s path and realized the emergence of his own spiritual journey by delving deeply into an earlier (medieval) age of monastic culture, we also might want to delve a little into the riches of spiritual treasury of our tradition and enrich our own journeys, not simply on our terms (which tend toward a cultish emphasis upon the individual as well as a socio/political and economic presentism) but on terms familiar to the people of that time. In the interests of brevity, I will consider only three values expressed by the great Gothic cathedral of Notre Dame that we might wish to apply to our common cultural (and ecclesial) moment:

There are indeed droll gargoyles overhanging the sides and entrances of the cathedral proper and they do present particular admonition about sinfulness and impiety; nevertheless, they do not impede entry into the sanctuary and the (medieval) congregants were not deterred: the men and women walked under the looming watches of the gargoyles and through the doors into the sanctuary. The hope of/in salvation and for/in the animating progress within the world future pulsed throughout the cathedral and there was space for joy.

We, of course, live in a dark, even dystopian, era and it has been difficult to rest in hope or find joy in much of daily life. However, there surely was much in the 12th and 13th centuries to cause pessimism and no small degree of despondency, and yet there were still public (as well as private) gestures of optimism, faith and trust. We might want to consider opting for the light more than resigning ourselves to the darkness. As Viktor Frankl reminds us, each of us has the freedom to choose how to respond to whatever situation distresses us, and we have that choice. We can choose to ‘dwell in possibility’ and live with joy in the future. Like the medieval bricklayers, stone masons and artisans who toiled at their craft even though they were quite aware that they likely would not live to see the completion of the cathedral, we can choose to trust in each other and in a fellowship greater than any one person, trust in a future of which we are but a small but vital part now, and be joyful for the many blessings that grace our lives.

Notre Dame de Paris still stands. Some of the building, including the 800-year old original roofing and its 300-ft. iconic spire, has been lost, as well as 10 percent of its works of art, but the high altar and the cathedral’s organ have suffered severe but not irreparable damage, and most of the stained glass windows, including the great Rose Window, remain intact. However, that material inventory should not detain us much. It is the primary structure of the church—its 12th-century footprint on the Ile de la Citie and its original signification that endure. What was fragile or incongruous or wearied has burned away, but what is secure and true and genuine endures. We do well to remember that.

June-Ann Greeley is a medievalist and professor of Catholic studies, theology and religious studies at Sacred Heart University.

This is only a preview. Your comment has not yet been posted.

The letters and numbers you entered did not match the image. Please try again.

As a final step before posting your comment, enter the letters and numbers you see in the image below. This prevents automated programs from posting comments.

Having trouble reading this image? View an alternate.

(Name and email address are required. Email address will not be displayed with the comment.)

The views expressed are those of the author and do not necessarily reflect the position of Sacred Heart University.
Subscribe to this blog's feed