A publication of Sacred Heart University
Home About Archives
The Promise of Vatican II: Still Waiting
A Moment of Grace and Healing: One Year into the Synodal Process

“When I use a word,” Humpty Dumpty said in rather a scornful tone, “it means just what I choose it to mean—neither more nor less.”

“The question is,” said Alice, “whether you can make words mean so many different things.”

“The question is,” said Humpty Dumpty, “which is to be master—that’s all.”

That the process of synodality has unsettled conservative Catholics in the West is nothing new. It has been a feature of the right’s critiques of Pope Francis and the synodal journey since the pontiff launched a revival of a consultative ecclesial method with consecutive global meetings on the family in 2014 and 2015.

That the critiques have morphed into increasingly alarmist campaigns against the synodal process is, perhaps, a sign that this shift to a more inclusive and missional style of Catholicism is taking hold. Last year Pope Francis not only expanded the traditional month-long synod meetings at the Vatican to be preceded by a global consultation, but he also extended the October 2023 “Synod on Synodality” in Rome to a second year to allow greater time for wider engagement and deeper discernment.

The fear of synodal inevitability seems to have focused the approach of the critics from praying that the synod process would flounder or go away, or that Francis would flounder or go away, to a tactic of turning the very term “synodality” into something sinister. It’s a clever and common, if insidious, move: No one knows what synodality really is, they claim, and that “confusion” actually proves that synodality is a cover for some Bolshevik-style takeover of the church.

It’s a circular and self-propagating strategy, much in the way that the American right has turned phrases like “Critical Race Theory” and “wokeness” from calls to fight racism and work for social justice—basic Christian commands—into leftist brainwashing propaganda that will destroy God and Country. Heads they win, tails we lose.

This maneuver has been part of the anti-synodal arsenal since the beginning. In October 2014, before the first synod under Francis was even over, then-Philadelphia Archbishop Charles Chaput, a devoted culture warrior, declared that the message coming out of the Vatican gathering was one of “confusion.” And, he noted for good measure, “I think confusion is of the devil.” Chaput later argued that he was misunderstood, but in subsequent years doubled down on his criticism of synodality and Francis, himself, as “confusing.”

More recently, JD Flynn of The Pillar, a conservative Catholic blog, tweeted that synodality was simply just another church “slogan”: 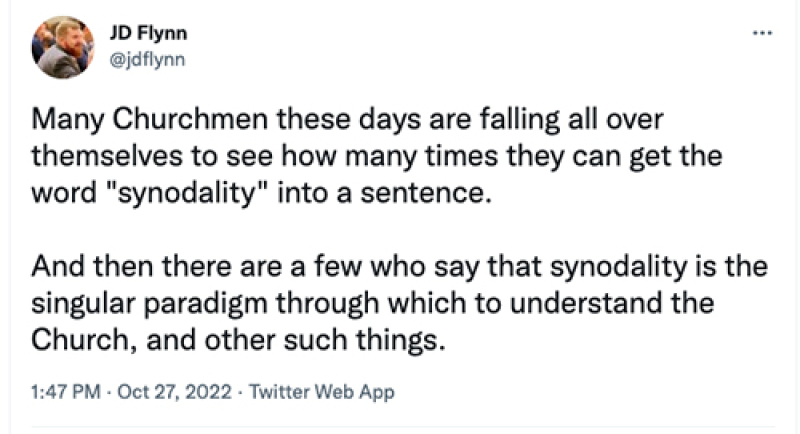 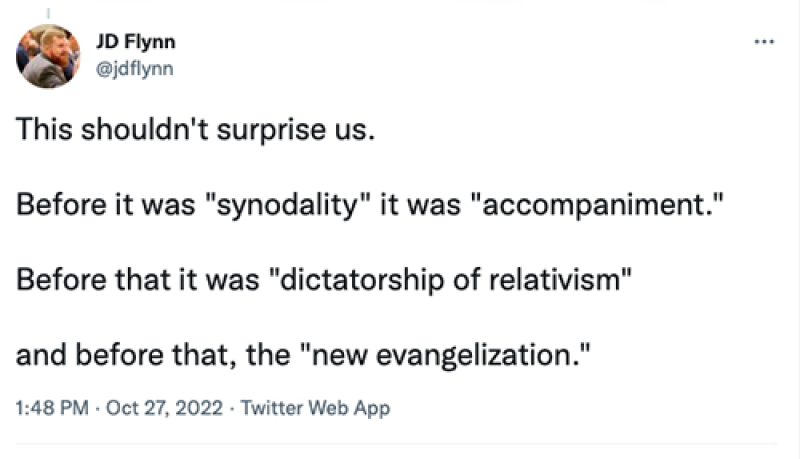 Nothing matters, it seems. Let’s tear down the whole temple rather than let our enemies win. It’s a view that betrays a profound and disturbing cynicism about Catholicism, all the more so because it comes from those who claim to be the most devout Catholics. When people who spend their careers in ecclesiastical precincts promoting those other terms as definitive markers for what it meant to be a “good” Catholic suddenly declare that it is all empty sloganeering and you can’t trust any of it, well, that’s truly a new kind of evangelization.

The release in October of a 45-page synthesis of the various local and national synod reports from around the world was an occasion for more dunking by the Catholic Right on what they saw as groupthink argle-bargle rather than clear doctrinal declarations. Of course, any document-by-committee is always going to slide into jargon or infelicitous phrasing at various points, and word clouds ought to be swept away. But the conservative critiques would carry more weight if they weren’t coming from the same crowd that argued for the transcendent beauty and dogmatic clarity of liturgical brainteasers like “consubstantial.”

Synodality, on the other hand, has a venerable history in the church. Google “John O’Malley” and “synods” and you will come up with a long list of accessible articles by the late great Jesuit historian explaining the history of synods and councils and the process of deliberation and discernment that they entail.

The only ones sowing confusion about the synod process are those standing on the sidelines. They don’t like what’s going on, but they don’t want to participate because they may not get all that they want. That’s their problem, because synodality is something that needs to be lived to be truly understood, and millions of Catholics around the world are doing just that.

The synthesis recently released by the Vatican notes at the start that the document “does not provide a definition of synodality in the strict sense … but expresses the shared sense of the experience of synodality lived by those who took part. What emerges is a profound re-appropriation of the common dignity of all the baptized. This is the authentic pillar of a synodal Church and the theological foundation of a unity which is capable of resisting the push toward homogenization.”

That doesn’t seem confusing at all.

David Gibson is a journalist and author and director of the Center on Religion and Culture at Fordham University.

You mind sharing the rest of JD's thread?

Consubstantial is an uncommon word. It is a mouthful. Right trinitarian theology may require that from time to time. Nevertheless, it is easily defined 'with the same essence". See, 4 words. Synodality is seen as bolshevik style BS because not only can a random guy on the internet not define it succinctly, but neither can its promoters. Nor can they tell us how this essential element of the Church wither fits with the marks of the church, or somehow was absent from the church's life for a millennium but is now absolutely necessary to being a Catholic.

For what it's worth, I think synodality is great. And I know how to define it. And I've said that about a million times. This is silly.

This is only a preview. Your comment has not yet been posted.

The letters and numbers you entered did not match the image. Please try again.

As a final step before posting your comment, enter the letters and numbers you see in the image below. This prevents automated programs from posting comments.

Having trouble reading this image? View an alternate.

(Name and email address are required. Email address will not be displayed with the comment.)

The views expressed are those of the author and do not necessarily reflect the position of Sacred Heart University.
Subscribe to this blog's feed